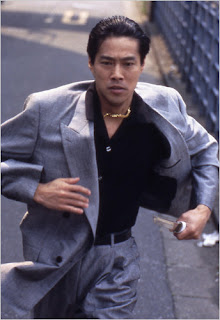 DB here- It's day two of our week long look at the work of the director Sabu. Today, we've got Mondocurry looking at the directors first film, which he saw at The Japan Society's restropsective of Sabu films.


Dangan Runner is Sabu’s first film, although it was the second I saw during his retrospective at Japan Society. Watching this movie after seeing Monday, I noticed that many of the ideas and visual themes the director is known for were already starting to take shape in a cruder yet often entertaining form.
The film starts out by depicting the powerlessness and frustration of mild mannered Yasuda, played by Tomoro Taguchi of Tetsuo: Iron Man infamy. This sets the tone for the robbery he will try to commit, which, in no time, goes exceedingly wrong. When this happens in a Sabu film, the results can be hilarious or tragic, and often a little bit of both. This time things go humorously, and lead quickly into setting up the nonstop foot chase involving Yasuda, the cashier at the convenience store he tried to hold up (who has issues of addiction and relative powerlessness of his own), and a yakuza enforcer played by Tsutumi Shinichi (in quite a role reversal from the unimposing salaryman he portrays at the beginning of Monday). This goes on for the bulk of the film, while every so often, there are cutaways to two institutions that Sabu seems to take pleasure in poking fun at: The police and the Yakuza. Compared to the three runners, they are not moving very much at all.
It is a simple concept, yet through it, Sabu explores some interesting ideas. At first, running brings to mind the bustling, unrelenting pace of life in metropolitan Tokyo, inescapable if you are on a lower rung of society’s ladder. The three runners play out their roles as the chased, the chaser, or both, constantly running from or after something, with seemingly no alternative. Later, running takes on a different representation. It blurs the boundaries that separate each character. Rather than running from and after each other, they move together, their similarities more significant than their differences.
Shortcomings of the movie come down to one simple factor: budget. While the final spectacle in Monday is an action-filled frenzy, Dangan Runner’s climax looks murky and the action is rather static. Similar issues affected the film Unlucky Monkey, which was released during the 2 years between Dangan Runner and Monday. Perhaps finances had yet to catch up with Sabu’s elaborate visions.
On the other hand, instances of Sabu’s clever humor do not suffer from the lack of funding to his early films. Take for instance, the scene where the runners three pass by a beautiful lady poised to pick something up off the ground. All of them glance back at her, emphasizing their similarities. We are given a glimpse at each one’s sexual fantasies: one is gentle and frilly, another overbearing and threatening, while yet another clings to an artificially slick sense of style. The sequence is hilariously put together, but also speaks to how deeply rooted one’s position in society is, shaping even one’s unconscious desires.
It is the ability to make this kind of idea work on the audience’s brain at so many different levels that makes all of Sabu’s work worthwhile viewing. I’m hopeful that sooner than later, his earlier and upcoming films will enter the realm of accessible on these shores.
Posted by Steve Kopian at March 15, 2011