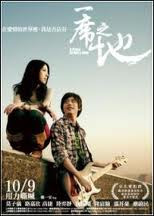 The search for a place of one's own, both in the sense of a place to live but also in matters of the heart, is the focus of this excellent film.


The film is one that follows a variety of characters who cross each other's paths in the limited confines of Taipei. There is a respected musician whose career is going nowhere; his ex-girlfriend, also a singer, whose career is taking off; a young man who dresses in a tiger costume and hands out fliers; his mom who tends the graves of the loved ones of people who can't or won't go to the cemetery; a couple who make origami houses for the spirits of the dead to live in; and the son of a mafia boss who befriends them. All are being affected in some way with the need to find a place of their own.

Episodic, the film takes a little bit to get firing on all cylinders as it takes its time to introduce us to someone, and lets us get to know them before moving on to the next person. It's a dangerous thing to present it this way because if any of the characters don't engage you as much as any of the others, you'll be fidgeting as you wait to get back to the ones you like. That's not the case here, as you like everyone equally, or enough that you don't mind waiting to get back to the people you like more.

This could have been just another multi-character drama but the filmmakers manage to do a few things that make this film really shine.

First up; the music that is used, particularly the songs by two of our characters, is really good. I would gladly listen to it outside of the film. That the music is so good is surprising since more times then not people will make films about a songwriter and then they will give us really bland or terrible songs. Who would listen to that sort of thing? Here the music is really good, and I almost wanted to stop the story and continue to just listen to the music. More importantly the songs that reflect what is occurring on screen are good songs, not just something thrown together to fit the moment.

Next, they don't give us the same old characters. Yes, we have musicians, but they aren't young kids on the verge; they are old hands who spinning their wheels. We have the son of a mafia leader who is rather charming. Then there is the couple who make the origami houses. Not only is what they do really cool, the details of their story is not typical. For example he's ill but won't get treatment because it's not 100% assured of helping, and it's so expensive.

To be perfectly honest, it's the characters that make the film. You will like them. You'll like them so much that you'll forgive the film its occasional hiccup.

Definitely worth searching out (the film is not currently out in the US, but it is available as an import)
Posted by Steve Kopian at March 21, 2011