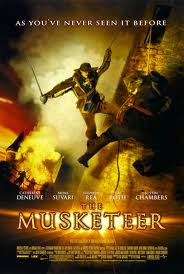 Peter Hyams' version of the Three Musketeers is not a particularly good film. Hampered with a streamlined and radical rewrite of the classic tale, the film has some technical flaws that make it a tough sell for any conventional audience.

You're probably wondering why I would then recommend it. Well I'm coming to that.

Peter Hyams is a very underrated director. Tending to write and shoot his own films he's made some really good ones such as 2010, Outland, Running Scared (Billy Crystal's version), The Star Chamber, and The Presidio. He's also turned out some less than good ones such as Beyond A Reasonable Doubt, The Relic, and this film.

The problem with the film begins with the rewriting of the Three Musketeers so that it's really just the singular of the title. The film is further hurt but having most of the shots seeming to have been overly close; they don't seem to be close-ups, more like when you zoom in on a DVD. You see part of the screen but not not everything. It's a mess.

And yet I'm recommending it.

The reason is that the action sequences are pretty good. They are the sort of things that you don't normally see in Western films, but rather what you see regularly in Hong Kong and Chinese action films.

There is a reason for this and that is the action director of this film is Xin Xin Xiong, who did a whole slew of great HK films. His credits include several of the Once Upon A Time In China films with Jet Li, and Coweb, a neat little film short on story but long on action. Watching the various bits of the final battle again (specifically the battle on the ropes and the warehouse ladder fight), I realized who had directed the action simply because he was stealing from himself. Sure the battles in the original films are better than what is here, but what's here is rather choice.

To be honest the reason that I am recommending this film is that if you've never watched some of the martial arts classics of recent times (either because you can't find them, or because you are like many people I know and won't read subtitles) seeing this film and its wonderful action sequences might just get you to at least try the real thing, or to try subtitles yet again.

I'm not going to lie and say it's a great film; it's not, but the action is a wonderful sampler of what is out there waiting for you if you want to look for some things that will blow you away. Forgive the film's many faults (such as dark lighting which BeyondHollywood.com probably rightly suggests is to hide all of the Chinese stuntmen) and you may have your eyes opened to a world of new possibilities.
Posted by Steve Kopian at March 23, 2011