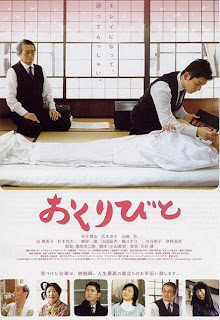 Oscar winner for best foreign language film, which shocked everyone in the know, or at least those who handicap such things. This was a film no one had seen or knew anything about, how could it win? In Japan the masses were shocked this was submitted instead of All Around Us, which was reviewed here at Unseen last year.

Me, I don't care about the awards, the movie is everything; this movie is amazing.

Yes I know it won an Oscar but I'm going to bet that you still haven't seen it. Most people I know who see every Oscar film haven't seen it. I have no idea why, but it's a film that has fallen through the cracks despite having a bright Oscar light shone on it.

The plot of the film is simple in the set up. A concert cellist is let go from an orchestra due to lack of funds. Returning to his hometown with his wife, he begins the task of trying to find a job. Strangely there is a well paying job that appears to be right in front of him. Jumping at the chance he takes it, which involves working in a funeral home helping to perform the ceremonies that will send people's loved ones on their way.

No it is not maudlin. In fact the film is wonderfully uplifting, even as it breaks your heart.

I remember seeing this the first time as an import from Chinatown. Sitting there watching the film I was absolutely floored by what I was seeing. It moved me to tears, so much so that a couple of days later I went back into Chinatown to pick up copies of the film to give as gifts. I had to make people see this movie.

You have to see this film. I'd love to grab you all by the lapels and make you watch it but that might be considered assault. As for buying you all copies, I don't have that much money. The best I can do is simply tell you that the film is out there and demand that you put it on your list for Blockbuster or Netflix.

Do yourself a favor, see this film. It will ultimately make you feel good.
Posted by Steve Kopian at March 25, 2011