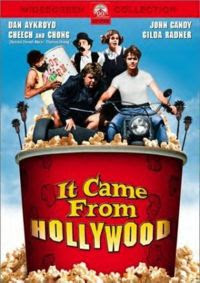 Because of a rights issue It Came From Hollywood is damn near impossible to see. It was supposed to get a DVD release a few years ago but the knotty issue of the right to use the clips rose up and the discs were withdrawn just as they were to be released. A few escaped but now if you want to see this very funny movie you either have to dig out your old laser disc, VHS tape, or pray that one of the odd cable stations runs it.

The film is a collection of choice clips from “bad” movies introduced and kidded by Gilda Radner, Dan Akroyd, John Candy and Cheech & Chong. The clips are from every type of movie imaginable with titles like Prince Of Space, Monsoon, The Incredibly Strange Creatures Who Stopped Living And Became Mixed Up Zombies, Attack Of The Killer Tomatoes, and of course the films of Ed Wood.

The films clips are grouped together by subjects such as BRAINS. After a title the films are introduced by one of the stars who does a little sketch before providing some pithy dialog. The clips and the narration are the subject of much mirth. In a weird way the film is a kind of forerunner to Mystery Science Theater 3000, except that the riffing is over a clip instead of a whole film.


I love this movie a great deal. I've seen it so many times I've lost count. I know that when it was in theaters my brothers and I would make regular pilgrimages to whichever local cinema was running it to see it.


In all honesty I've seen most of the films in this film straight and many of them do play better with the ribbing.


If you can find a copy do so. This is a great party film and one of the best comedies out there.


(An aside. There is a weird shootout between Sydney Toler and another man where we watch as the two shoot slowly at each other. Bang....bang...bang....bang....and on and on until someone falls down dead. It looks like the people behind It Came From Hollywood played with the footage to draw the sequence out. Well, surprise, that's the way it is. Find yourself a copy of the film Monsoon directed by Edgar Ulmer and you'll see what I'm talking about.)
Posted by Steve Kopian at March 31, 2011