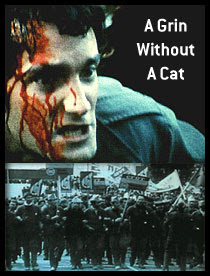 I saw the director's re-cut version that removed an hour of material from the film's original four hour running time (something director Chris Marker said needed to be done).

The film opens with one of the most stunning things ever put on film; footage of political protests and violence inter-cut with the Odessa Steps sequence from the Battleship Potemkin. As one comment I read pondered, was Sergei Eisenstein that ahead of the curve that he mapped out what political violence would look like in the future, or has that always been the way its looked? I don't know. Next the film moves on to show a US pilot describing in detail what he's doing and why it's "outstanding" to Napalm the people of Vietnam. If that doesn't rattle your cage little will.

From there the film moves on to various political protests and wars around the world, and we're left to ponder what it all means. Director Marker plays no favorites and in a way every side comes off looking less then perfect. He simply shows us the footage, lets the people speak for themselves, and uses various other voices for narration.


I'm still pondering what it all means. I know watching a three hour movie around midnight was a bad thing to do, but this is a film you fall into. It drags you along as you kick and scream at it because you don't want to think at the level that this film asks you to. I'm not sure what I make of it all, and I know that I'll need to go through this a couple more times, but I'm glad I've seen it and have been forced to confront its issues.

On a personal note: I watched Chicago 10, in the middle of watching the parts of this film and I found that Marker's film changed the way I see the anti-war protests of the 1960's. Chicago 10 is about the trial that followed the riots during the Democratic Convention in 1968. Seeing part of Grin before Chicago 10, it suddenly becomes clear that as much as what happened in Chicago was important (in that it started things moving toward the end of Vietnam and other events), it was also something that in the grand scale of things didn't have huge stakes. You didn't have the Soviet Army marching in to retake control of Prague. You didn't have the political violence that was going on in Bolivia or Africa or elsewhere. While elsewhere in the world you had people dealing with the political ramifications of their actions on a one to one level, here in the US you had Abbey Hoffman and several other members of the Chicago Ten treating it all as if it was a joke on some level. Yes there was injustice and violence, but not so many people were dying and no one was tying Hoffman to a chair and torturing him for the hell of it. I'm not one to take things seriously, but at the same time in the face of what was going on elsewhere in the world the jokes really come off as ill advised. For me, who was raised to see Hoffman and many of the Chicago Ten as heroes of a sort, seeing them in action, especially in light of other political movements, kind of make them seem like rich jerks.

Clearly A Grin Without A Cat has changed how I see the world. See it and have your world view changed as well.
Posted by Steve Kopian at March 30, 2011