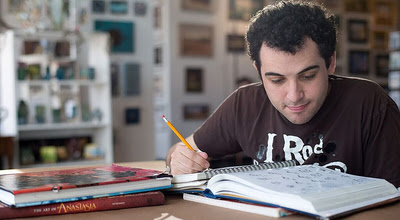 I remember reading about Owen Suskind a year or two ago online and being touched by his story. When I found out they turned his life into a documentary that was premiering at Tribeca Film Festival, I was looking forward to seeing it. As someone who loves Disney, I was delighted to learn that Disney films helped Owen Suskind’s autism. The documentary showed old video footage of Owen as a “normal” kid with his family and then footage showing how he changed, at the age of 3 and became different. At the age of 3 his parents said he “vanished” and became a different kid. His language process broke down, he wasn’t sleeping, his motor skills deteriorated. They took him to the doctor where they concluded that he had autism. He didn’t speak for a year and didn’t make eye contact with his family. He would watch Disney films with his brother and they noticed that was the only time he seemed calm and happy.

The first thing he said (after a year of not speaking) was a garbled version of “just your voice” from the Little Mermaid. The parents went to the doctor and asked if it could be a breakthrough. The doctor said often autistic kids repeat what they hear and that he didn’t think he knew what he was saying. Indeed, we later learn that Owen has all the Disney films memorized.

When Owen was 6, his brother had a birthday and was sad. Owen says “Walter doesn’t want to grow up like Mowgli or Peter Pan.” It was the first time he spoke in a natural way in his life.

This shows that he also has some form of understanding and intellect.

Another breakthrough came when Owen’s dad took Owen’s Iago stuffed animal and talked to Owen in Iago’s voice. For the first time Owen spoke to his dad, (or to Iago rather) an actual conversation.

His father found a book he did of drawings and it was all of the Disney sidekicks, no hero’s. He wrote a story and it was called “Land of the Lost Sidekick”. In it he said he’s the protector of the sidekicks and that no sidekick gets left behind. He wrote this after getting bullied and tormented in high school.

I’m not very familiar with autism, and there is still a lot I don’t know, but this film opened my eyes. It was a very moving documentary that made me teary quite a few times. His parents who never gave up on their son, treat him like an adult and Owen has to deal with many of the same challenges in life that we all face; having a girlfriend, breaking up, having a job interview, moving out. It was very touching and I recommend it.
Posted by Steve Kopian at April 23, 2016