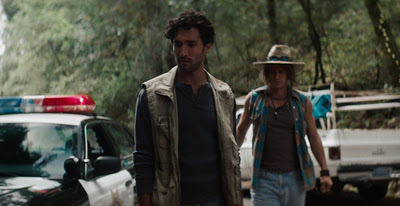 Very good attempt at a modern film noir with a socially relevant edge has a fixer from Afghanistan moving to California and getting a reporting job at a small paper. He thought it was a big job, but he is given the police blotter as a token position. Wanting to make more of it he tries to get to know the town and he runs smack into a crazy loser who draws him into a potentially dangerous situation.

An occasionally by the number crime thriller is full of enough weird crazy characters and odd ball situations to freshen up a story that at times feels like we've been here before. Beginning with out hero, who really is a fish out of water and going on from there this film genuinely makes an effort to be different and it pays off in a compelling story that doesn't go the way we expect it to go. Its so nice to see a film that takes the tropes of film noir and bends them into a film that is actually worth seeing.

If there is any real problem its the casting of James Franco as the loser. Wearing a weird fright wig and hate and speaking with an accent that belongs in another movie Franco makes a big impression in a small but crucial role. Unfortunately he is so bad that he single handedly wobbles the film to the point that what could have been a great film plays as a very good one. Because he is so bad you question everything around him, which isn't the way it should be. While wounded by Franco the film isnt killed and it's perfectly watchable.

I really liked the film a great deal and I think it's worth your time and your money (though not the 20 dollar top ticket rice for Tribeca.- wait for the regular release if you can't get to a discount screening)
Posted by Steve Kopian at April 19, 2016