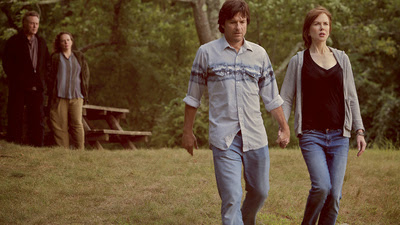 Jason Bateman and Nicole Kidman play brother and sister. They are grew up in a family headed by their parents who were artists who loved to shock and they used the kids to help push society's buttons. When their parents disappear and the kids don't know if its a joke or the work of suspected serial killer. Needing to know if its a joke or not the siblings begin to investigate.

Darkly tinged family comedy drama is much sadder than I expected. A dark pall hangs over every thing  as the very damaged children battle with life and each other as they try to work out if they even want their parents back. As more and more is revealed what was once an an amusing game became abusive in ways that aren't pleasant to contemplate.

Jason Bateman has a fine turn in the directors chair taking a very off beat story and managing to make it both funny and sad, often at the same time. Its so nice to see him proving he can do more than low brow comedy. He proves to be a wonderful actor as well. Kidman is equally good as the daughter hoping that if she can just find her parents she can make it all right again.

I really liked it a great deal. If I had to find fault with the film it would be that there is a coda to the film which spells out what is extremely clear from the scene that should have brought the final fade out.

Recommended to anyone interested, just be ready for a more serious film than some of the writ ups and trailers would lead you to believe it is.
Posted by Steve Kopian at April 17, 2016