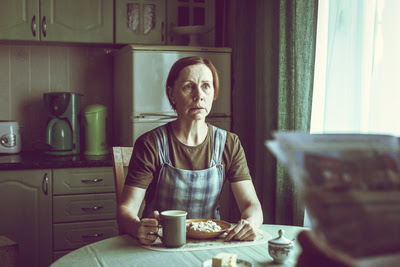 In a small town a mother tends her son who was put into a coma after being shot in a robbery. As the various friends, lovers and police come trampling through we are left to piece out what happened.

Odd story has its bits revealed in stages is interesting for a while but ultimately bogs down in a formulaic telling which has various people appear at the door to see the vegetative young man and talk to him. The added dimension of ransacking the room is added once its revealed that he had taken out some 80,000 euros not long before being shot. Everyone wants to get their hands on it. Largely various people, most red herrings appear, talk to the sick man and then have coffee with the mother.

Is the payoff worth it? Kind of, but not at the 20 dollar ticket price they are going to be charging to see this at Tribeca. Its just not that intriguing.
Posted by Steve Kopian at April 20, 2016