Packed in a Trunk:The Lost Art of Edith Lake Wilkinson (2015) 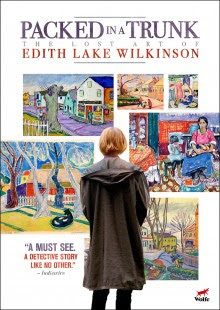 I had stumbled upon PACKED IN A TRUNK when it ran several months ago on HBO. I happened to just turn on the station a couple of minutes in and saw that it was a film about art and I fell into it. This was just a really cool, really well done story. And when it was done it found a small little place in my heart and has been traveling around with me ever since. For whatever reason I never wrote up the film back then. In a weird way it was just something I was carrying around with me and didn't need to stamp it into my memory. And then I was told that the film was coming out on DVD and home video tomorrow so I jumped at the chance to write it up.

PACKED IN A TRUNK is the story of Jane Anderson who grew up with the paintings of her great aunt Edith Lake Wilkinson, a gifted artist who ended up being sent away to an asylum in 1924. Anderson became obsessed with unlocking the story of her aunt and when she first made efforts in the 1970's to find out about her she met with no success, However once the internet age started and a website was started Anderson began to find the mother-load of information as she discovered that her aunt was one of a group of artists who  influenced modern American art. (And she may have originated a style of block printing)

Not only is it a great portrait of a great artist but it's also a wonderful look at the changing times. Edith was a gay woman in the early 20th century when women were marginalized and being gay could, and her case did, get her sent away to an asylum. Jane her grand niece is also a gay woman but unlike her aunt is not marginalized and she was able to marry, Tessie, the love of her life.  Its the story of  how thing are getting better and how mistakes of the past are being corrected.

Mostly though this is just a great detective story. Like the best detective stories its not only the tale of the solving of a mystery but also spending time with detectives we like. We like traveling with Sam Spade or Philip Marlowe or Alex Cross. We follow their adventures for the people at the center as much as the crime. Here we follow the unraveling of Edith's tale not just because we want to know her tale but because Jane is so engaging. We get hooked on her enthusiasm and we feel the joy she does as the locked doors are opened and the secrets are revealed.

This is a must see-highly recommended when it its home video and VOD tomorrow
Posted by Steve Kopian at April 25, 2016