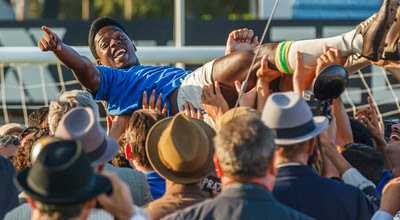 The long in production film has been kicking around as behind the scenes troubles made it miss it's original release date by two years. It finally made it's world premiere last night and strangely we are better for it.

The story follows Pele from the time he was ten years old to the point eight years later when he helped the Brazilian soccer team win the world cup when he was just 17.

The film is surprisingly compelling and may even bring a tear to your eye as it hammers home quite literally every single sports film cliche that there is multiple times. On the face of it the film is utterly ludicrous but at the same time is so in offensive it manages to get away with cinematic murder and end up being completely entertaining.

The critics I saw this with were flabbergasted that anyone could make a film so full of cliches- but at the same time most admitted that they actually liked it despite being so hackneyed.

The perfect popcorn film it's highly recommended for anyone who wants an undemanding but absolutely enjoyable film.
Posted by Steve Kopian at April 24, 2016