For those unfamiliar with DJ and producer Z-Trip, he is an innovative turntablist who released the legendary album Uneasy Listening Vol. 1 along with DJ P in 1999 which helped popularize the mashup which is a song that seamlessly blends two or more prerecorded songs.  DJ Z-Trip was also featured in the Doug Pray 2001 documentary SCRATCH which put a spotlight on the hip hop DJ and the turntablism phenomenon.

Last year at Tribeca, Z-Trip provided the soundtrack to the Harold Lloyd 1928 silent film, SPEEDY. This year, Z-Trip was asked to return and provide the soundtrack to another Harold Llyod classic, SAFETY LAST! and once again it was all done live in front of an enthusiastic audience not knowing what was going to blast out of the speakers.

The romantic comedy opens with Harold Lloyd leaving his mother and his girlfriend, Mildred for the big city to make some money so that eventually they could get married.  Harold gets a job in a department store as a clerk but convinces Mildred that he is a manager.  A surprise visit by Mildred sends Harold's masquerading misadventures spiraling out of control.  Harold asks his friend to participate in a zany publicity stunt involving scaling the outside of a 12-story building to draw more customers to the department store.  Plans backfire and Harold ends up making the climb which features a classic sequence that find our fearless hero hanging by a clock high above the city. 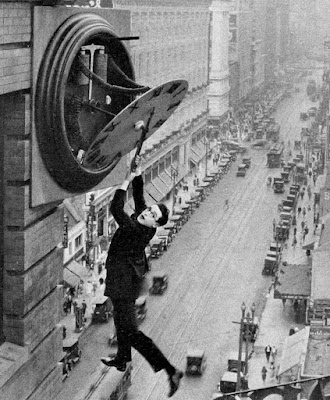 The film has stood the test of time and is still a fun and hilarious movie to watch with an audience.  Throw in Z-Trip and his turntables to supply the soundtrack and you take it all to a different level.  Warming up before the screening with a furious remix of  Metallica's "One" was an early indication that the screening was going to be buck wild.  During a train sequence, Z-Trip dropped an Ozzy Osbourne snippet and Black Sheep's "The Choice Is Yours."  "Man In The Box" by Alice In Chains was featured in a scene where Lloyd is trapped in a speeding box truck.  Perfectly timed "slide whistles" and video game sound effects from Donkey Kong, Pac-Man and Super Mario Bros. brought out the chuckles. Z-Trip snuck in a a tribute to Phife Dawg, a well-loved MC who recently passed away,  with "Can I Kick It?" by A Tribe Called Quest. There are too many songs and references to name but towards the end there is a perfectly placed theme song to the 80's show "Greatest American Hero" which complimented the jaw-dropping derring-do on the big screen.


Check out the video below for a Q&A with DJ Z-Trip which took place after the screening.