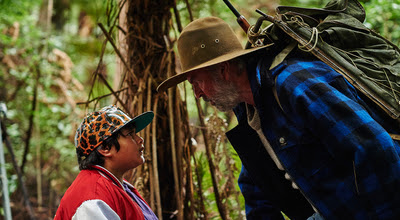 HUNT FOR THE WILDERPEOPLE was the first fiction film I saw for Tribeca Film Festival.

It was hilarious! I wasn’t sure what to expect from this film. I didn’t know much going into it. It’s based on the book “Wild Pork and Watercress” by Barry Crump. I had never heard of it. I didn’t know it was even based on a book until after the film, though I wondered if it was when the movie was laid out by having “Chapter 1” “Chapter 2” and so on as the movie went on. In “Chapter 1” a woman from Child Welfare (Paula), drops off a boy to a woman and man who had never met him before, but had decided to let him in their care. Paula warns them that he’s not a good kid, has stolen, spit etc. that he has been in many different families. The woman loves him from day one.

Circumstances occur and the boy escapes into the bush. The man eventually follows him and so starts the adventure of this unlikely duo running from the woman from the agency, as well as from the police. The film continued to be humorous, though there were some serious moments and some touching moments as well.

The film takes place in New Zealand and the scenery is gorgeous. I loved the music in the movie as well. It was kind of a campy movie. I felt it was different and it was definitely silly, but very entertaining. The movie’s humor was both dry and ridiculous. I really recommend this movie and it’s one I would see it again and bring a bunch of friends with me!

(Addendum- I saw the film at a pre-festival screening and loved it so much that I've gone back and sawthe film again at the festival)
Posted by Steve Kopian at April 21, 2016