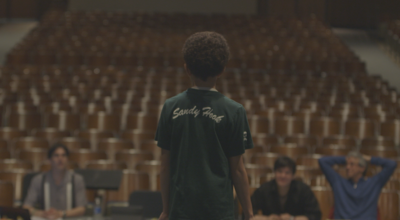 In the wake of the school shooting at Sandy Hook the several members of the Broadway community went to Newtown and put on a musical version of Shakespeare's A Midsummer's Night's Dream using people from the community. Meanwhile one father puts a jazz album together to to honor his daughter.

This is a disappointing look at the way the community of Newtown sought to heal it's wounds after the shooting. The trouble with the film is that despite having several deeply moving moments the film tries to do too much and the film feels really unfocused. What exactly the the film about? Nominally the play, but the film keeps darting off. We don't get to know the kids who should be the focus, past a certain point. I wanted to really know Sammy and Tain more(especially after his kick ass reading of The Jabberwocky). The film wanders all over the place. And while I have nothing against the inclusion of the Green's story about the death of their daughter, the inclusion of the making of the album and their story past a certain point derails the movie since it never feels part of the rest of the film. Worse the section does a disservice to the family since we never really get to know them as people, their son is a phantom and the brevity with which they explain things results in them sounding too aloof.

I initially didn't want to see the film because I thought it would be too painful, instead I found I never need see it again because it isn't very good.