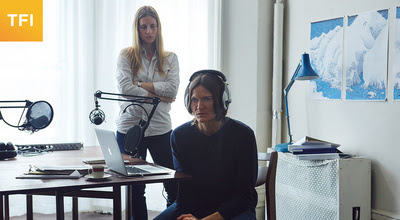 Park Slope Brooklyn set film follows two women who run a female serial killer podcast. They once were lovers but now are friends who live together. When a new girl turns the head of Morgan her ex thinks that she might in fact be a serial killer.

Uneasy mix of comedy and thriller didn't work for me because they never got the tone right. Yes some of the dead pan humor is funny, but the is she or isn't she never generates much frisson I think because ultimately I don't think that writer/director/star Ingrid Jungermann knows if she is or isn't.  Most of the tension comes from the music rather than what is happening on screen.

While I think the cast is largely fine, Shelia Vand from GIRL WALKS HOME is especially good as the maybe killer, I think the frumpy Morgan played by the director undercuts the film. She isn't particularly likeable and comes across as Buster Keaton wannabe if Crispin Glover played it in drag. I understand this is deadpan humor, but to me it's just dead.

As much as I bash the film, I don't think it's a terrible film, rather it's one that should have and could have been infinitely better.

Most of the other people in the audience liked it more than me so feel free to give it a shot- and if you live in or know Park Slope definitely see it.
Posted by Steve Kopian at April 18, 2016