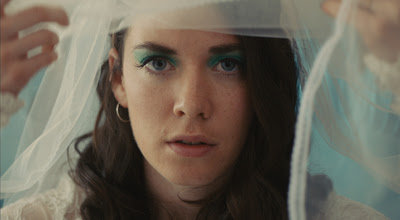 MADLY feels like a full evening of films. Comprising six short films on the subject of love the collection is rare in that the films are not only all pretty good, but actually solid enough that they could function outside of the collection on their own terms.

The first thing that you need to know if you’re going to see MADLY is that none of the films is what you expect. Saying the collection is about “love in the modern world” is a poor choice since it implies they are romance and they are for the most part not. The films cover any sort of thing that could be considered love. If you go in with any sort of expectation you are going to be disappointed.

CLEAN SHAVE concerns a married woman who has a closer relationship with a younger man. The relationship seems to be romantic but they are just good friends. When she takes steps to make herself more modern her life explodes as her husband assumes there is an affair in the works. It’s a moving small film about how we see the world and ourselves.

AFTER BIRTH is a very strange film about a single mom who has a weird relationship with her new born. I honestly don’t know what I think of this film other than it is very off kilter.

DANCE DANCE DANCE is a great little film about a teenager’s life which goes sideways when his feelings for his best friend force him to come out to his parents and he’s forced onto the streets. It’s a moving film which I’d love to see expanded into a feature

LOVE OF LOVE is Sion Sono’s confection about how an engaged couples love of a sex club changes the lives of her family. Its quite funny

LOVE OF MY LIFE is Gael Garcia Bernal's WTF film about a couple with a large age difference trying to navigate things. I am not sure what its about or why I should be watching it. The weakest film in the collection, the press notes contain all sorts of information none of which is actually in the film. (talking to several other writers the film had everyone scratching their head)

I DO is the story of a bride and a ghost and a wedding. It’s a nicely off beat little film.

I really liked this film a great deal. It’s a film that has haunted me since I saw it, hence my taking the time to write up a review in the middle of a very busy Tribeca. I love that it’s a collection of short films that are actually short films and not tests for features or show reels. I love that they are small movies. I freely admit that the film is not for all tastes but at the same time it is a film that is perfect for anyone who loves good movies
Posted by Steve Kopian at April 22, 2016