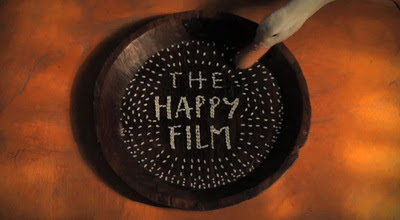 THE HAPPY FILM, is a documentary about graphic designer, Stefan Sagmeister, which is having it’s world premiere at the Tribeca Film Festival.

When I read what the film was about, I immediately wanted to see it, as happiness is a topic, I myself have thought about and questioned. The film starts off with a message on the screen “this film will not make you happy.”

After doing some research, he learnt there are 3 main ways that people try to become happier: meditation, cognitive therapy and drugs(which I later found out to be prescription drugs, not the drugs I was thinking of). Sagmeister said he would try each for 3 months. He would also measure his happiness daily on a scale of 1-10, he would keep a media diary and also came up with a system of rating himself, things he would like to change, such as to stop drinking alcohol, helping people and taking chances, every week he rates how well he did in each of the topics.

Since Sagmeister is a graphic designer, I must say, the graphics in the movie were amazing, I loved what he did and really liked his style. The music in the movie was good as well. My only critique is that several times I noticed the mouths moving did not synch up with the sound and I always find that drives me crazy and I find it distracting.

I really enjoyed this movie. I liked being on the journey with him and seeing how each of his 3 experiments worked for him. It also made me think of my own life..one thing that stood out was when the therapist said “seek discomfort to grow confidence” and when Stefan said “there’s a shitload of possibilities” and that chasing to find something meaningful was a pain in the ass but it made his life fuller. I feel this documentary is one that many people will enjoy and will make them think about their own lives.

OH! And stay until the end! The credits are fun and include some inspirational quotes mixed in!

More info on the film can be seen here: http://thehappyfilm.org/
Posted by Steve Kopian at April 16, 2016