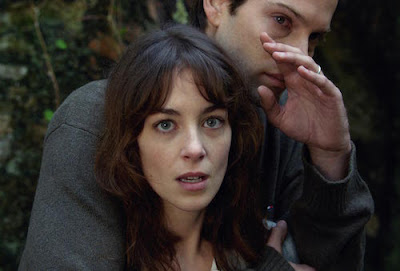 I really wish he hadn’t died since I’d really like to ask him what I’m supposed to get out of the film.

Don’t get me wrong the film has a couple of really great moments, is frequently funny (though I think some of the time we’re laughing at the film instead of with it) . But it’s a film that prompted one of the press corps sitting behind me to state loudly “Well that was something” when it ended and then hustle out of the theater saying he had things to do.

The film follows a law student who goes to a remote village with a friend to cram for his tests and ends up in the middle of weirdness as he encounters birds hung by their necks, a girl with an odd lip who looks like another girl in the film, a woman who periodically freezes in place, an almost daughter who smokes too much, and some other strange things. The student seems to be writing a novel more than studying. On top of it all much of the dialog seems to be more internal monologue than actual dialog.

What it all means is beyond me.

Actually what is really going on other than obtuse conversations, some unbridled lust and an occasional suicided animal is beyond me. Plot wise nothing much happens, its people wandering around a “hotel” and beach house being odd or very emotionally over intense.

I like the film but what its all about and what I’m supposed to be getting out of it is completely outside of my knowing. I’ve read several reviews hoping to find an "ah ha" momentand most talk about how it’s a great adaption of the Witold Gombrowicz novel it’s based on. I have no idea what that is supposed to mean since that makes it clear they are getting something from the novel that isn’t on the screen. As many of you know one of my rules for film is it all has to be on screen or the film fails and there is clearly something not on the screen here.

For me it’s an interesting doodle. It’s the perfect film to see with friends before dinner so you’ll have something to argue over when it’s done. In all honesty I don’t think your interest will last much past dinner. It’s a diversion and nothing more.


COSMOS starts Friday at the Metrograph in New York for a week long run
Posted by Steve Kopian at June 14, 2016