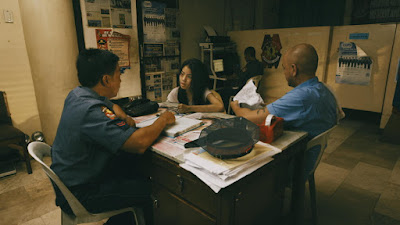 Four street kids live on the fringe of society scamming motorists and stealing whatever isn't nailed down. When one of the group is killed when a robbery goes wrong the group is rattled to the core. As one looks to pay for the burial of their friend, the others continue on but life has a way of smacking you in the face.

I should say up front this isn't a dark thriller, more a slice of life highlighting the street kids who are the poorest of the poor. The suspense comes from just seeing whether life kicks them in the teeth one more time. As one races to find the burial of his friend the other skate along until one is caught. How it all plays out is not entirely how you expect.

With one of the best casts of young actors ever to grace the screen HAZE amazes with its sense of reality. Hell if some of the shots weren't obviously set up for the camera, and if a couple of the adults were slightly better actors one could almost swear this was a documentary instead of a narrative film.

HAZE blew me away and then some.

This is grand filmmaking of the finest kind and I'm already looking to catch up with director Ralston Jover's other work.

If you can manage to see this when it plays tomorrow at NYAFF do so.

For tickets and more information go here.
Posted by Steve Kopian at June 30, 2016