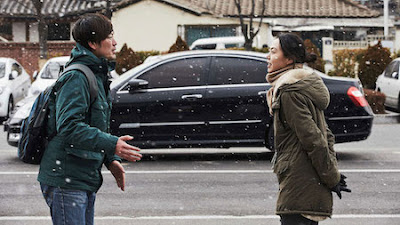 Hong Sang-soo returns with a film many hailed as one of the best films screened last year at the New York Film Festival and for some the best of 2015.

Not being a Sang-soo fan, I avoded it like the plague. To be honest I am one of the many people who are tired of him essentially making the same film over and over again. As I have said numerous times, I'm pretty sure that you could edit all of his films together in to one film and have it play perfectly. Additionally you could edit together clips from all his films and make a variation on Sang-soo's one plot.

At this point you're probably wondering why in the hell, if I'm not a fan of Hong Sang Soo would I take a look at RIGHT NOW WRONG THEN. Simple, the right to people told me to try the film and if I don't like it the walk away from Sang-soo forever and never feel bad about seeing another one of his films.

With that in mind I sat don and I watched RIGHT NOW, WRONG THEN.

The film is essentially the same story told twice with variations. The story is that of a film director meeting a young woman who is a painter and the course of their interaction over the course of a day.

To be perfectly honest I liked one telling of the story and not the other.I hated the first time through and really liked the second. My dislike of the first iteration has nothing to do with Sang-soo's notions of repetition and desire to revisit the same damn story. It has everything to do with the first part of the story feels like a rough draft, the sort of thing that any good artist would have burned when he got it right. Its the sort of thing that had I not been told it gets better I would have walked out and never seen again.

To be fair there isn't really anything wrong with the first pass, except that its full of all the little quirks and humor that I hate about Song-soo's work.

The second half of the film, and the one that gives the film as a whole it's title, is infinitely better. Made after the first half was done, Sang-soo showed the cast the finished film and then went out and remade it. The resulting film is a much meatier much deeper film.  It is the final product to the first half's unfinished doodle. The characters are richer, the plot fuller. There is something about our connection to the characters that is better.

I am at a loss to know why Sang-soo didn't simply release this better version instead of tying it to the lead weight of the first half.

I suppose that some of you out there are calling me a heathen. Some of you are saying I'm missing the point, the point is the repetition and how thing might play out another way. Thank you but I highly doubt it. I've had enough discussions with deeper minds and more artistically inclined minds than myself and I've told you the same thing that I've told them, that Sang-soo is largely full of it, that he is a one trick pony that he's sold a bill of goods to the cineastes as something greater and more meaningful than it is.

That said, there is no doubt that he can turn out some hellaciously good films, which the second half of RIGHT NOW WRONG THEN is. I really like the "romance" that plays out there.

I just wish Sang-soo would stop being like Orson Welles and Don Quixote and just make one film from start to finish and then move on to another plot line. Stop revisiting the same damn plot/themes since you've gotten it right, now move on.

My attitude toward the film is that is you're a fan of Hong Sang-soo the film is a must. If you've never seen one of his films, give it a try. If you are not a fan wait until the film hits home video, jump 55 minutes in and just watch the good stuff that is the second telling.

Sacrilege I know but that's what I feel.
Posted by Steve Kopian at June 20, 2016