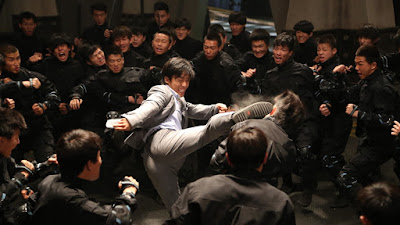 Song Yue's send up/ homage of the classic Hong Kong films is a pure delight. Its a wonderful modern day recreation of an old school style action film.

When his master dies Wu-Lin, aka Mr Hero, master of the Iron Kick goes to the big city to find former friend Jiang-Li.  Through circumstance too neat to bother with Wu-Lin goes to work protecting a spoiled rich girl. Of course all is not well between friends and a show down ends up in the cards.

Moving like the wind the film's plot is little more than an excuse to get martial artists and guys with guns to crash into each other. It knows the plot is throwing up is well worn and silly cliche tropes, its the classic battle of schools plot, but it turns it to its advantage, giving us knowing jokes and sudden unexpected situations that delight with the sudden turns.

And then there is the action, a glorious mix of head on bone crushing action mixed with knowing silliness. Its clear that they had a blast making the film because people are smiling during some of the battles. Little of it makes any real sense, the sequence where  Hero chases a van with the kidnapped girl in it would require his moving like the Flash to work, but its entertaining as all hell. This is a grand popcorn film.

An absolute MUST see when it plays Saturday at NYAFF- because this is a film that improves ten fold when seen with an audience.