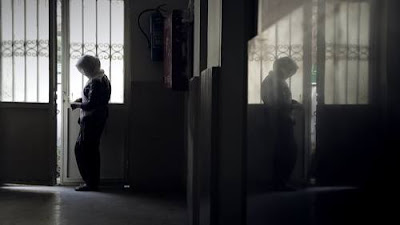 I'm not as tough as I sound. Its an act.

Playing more like a drama than a documentary STARLESS DREAMS is an unexpected punch in the face. You may have seen films about kids in a correctional facility but you haven't seen this.

Running a brief 75 minutes the film absolutely emotionally drained me as we jump back and forth between girls being girls and the stories of what lead the girls to be locked up. Broad smiles and laughs give way to pain and tears. Its a film that makes you like all of the girls and then repeatedly breaks your heart again and again as we hear their stories (I dare you not to cry when young girl is told that no one will bring her clothes to wear).

Pain drips from the walls

Director Mehrdad Oskouei has made a documentary that is truly something special. Not only does it reveal a part of human existence that most of us have never considered, not only is it a compelling tale, but it is also a cinematic work of art. Watching the film I had the feeling that I wasn't watching just a film or the stories of these young ladies in prison, but something greater,something larger. How it all comes together and transcends the documentary I'm not quite sure, but it has to be have been a combination of great skill at putting the film together and luck at having stumbled into such an interesting group of ladies to tell their stories.

If you see this film , have nothing right after it because you will want to recover.

One of the very best films at This years Human Rights Film Festival and of the year.

For more information and tickets to the New York Screenings go here.
Posted by Steve Kopian at June 08, 2016