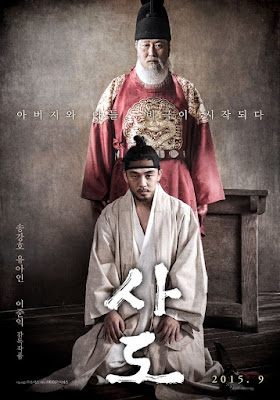 Telling the oft told story of the bad ending decreed by King Yeongjo for his son, Sado, THE THRONE looks to explore the relationship between those in power and those without it. Its a gorgeous looking film that will either suck you in and drag you along or keep you at a distance while you watch the first class performances and the art direction.

The official story of what happened in 1762 is that in order to stop the madness, debauchery and evil acts of his son, King Yeongjo had him placed in a rice crate for eight days without food or water while he slowly died. What exactly happened has been the source of speculation with some historians now claiming it was more a battle for power than anything else.

Here Lee Joon-ik has fashioned it into the struggle between a strict king and his free spirited son. Its a variation of the themes that Joon-ik has explore previously in KING AND THE CLOWN, BLADES OF BLOOD and BATTLEFIELD HEROES. However this time out I'm not sure he's as successful as he was in previous attempts.

Bouncing between the eight days the Prince spent in the crate and what lead up to the execution the film never full engaged me. I never really understood what the riff was between father and son. Yes I understood what brought it on- the Prince essentially made a public move to kill his father, but the bumpiness of the relationship didn't feel real. Something seemed off.

After the first ten or fifteen minutes I disconnected and just watched the pretty pictures. And while I will admit to getting teary eyed at the end I think that more the work of the editor than the story.

For tickets and more information go here.
Posted by Steve Kopian at June 28, 2016