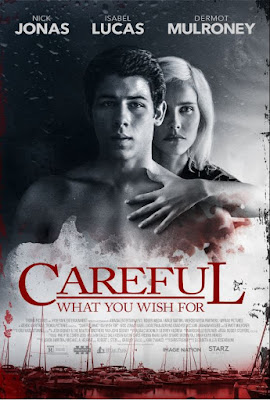 Hitting theaters and various on demand platforms today CAREFUL WHAT YOU WISH FOR stars Nick Jonas as a young man who gets mixed up with the wrong woman.

The plot of the film has relative innocent getting mixed up with the young wife (Isabel Lucas) of a wealthy older man (Dermot Mulroney). Sparks fly, the husband dies and then things get complicated.

It hard to really review a film like this. Not because it's bad but because its so middle of the road there is nothing to say. A great cast is given a good, if well worn script and they make a go at it. Its the staple film noir plot done in the day light of a resort community.  I liked the film. Its a wonderful little popcorn film. Its not the best thing ever to come down the pike but it is entertaining.

If you like films like this give it a go. Just don't expect Oscar material.(then again considering some recent Oscar nominees this is a hell of a lot more entertaining).
Posted by Steve Kopian at June 10, 2016