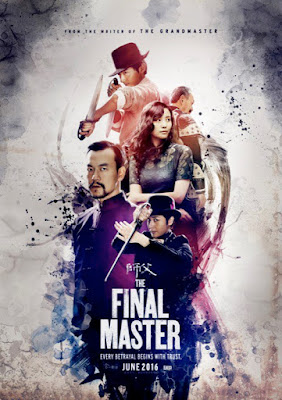 Wanting to fulfill his master's dying wish and open a new martial arts school Chen Shi has to beat 8 of the 19 schools in Tainjin. However if he shows up to fight he will get kicked out the city so he has to groom a disciple to fight for him. Of course the martial arts mafia doesn't like that Chen Shi and his student are kicking serious ass so they plot to stop the rise of the Wing Chun, the offending new style of fighting.

If you are seeing THE FINAL MASTER for a great story, just stop right now. The plot of the film is needlessly convoluted with more twists than it needs. I threw up my hands about a half hour in as I realized I was losing who was who and what they had to do with anything. Don't get me wrong I can follow the big picture with trouble its just all the smaller details and bits of motivation that left me scratching my head.

For me the best reason to see the film, and what makes it a must see for martial arts fans, are the excellent fight scenes. The wide variety of battles are what keeps the film interesting and completely watchable from start to finish. The battles are, at time, wonderful expressions of the characters fighting. I love that their is weight to them both in that we get a sense that they are having at each other but also because we feel there is a real reason to fight. Granted the plot frequently leaves the real reason behind, but at least while the swords or knives are clashing we feel they are fighting for a reason.

While imperfect THE FINAL MASTER is still worth your time and money when it hits theaters Friday because in this film it's all about the fights
Posted by Steve Kopian at June 01, 2016