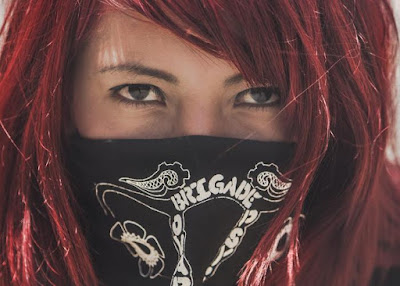 Ovarian Psychos is about an ever growing group of women of color who get together to ride their bicycles through the night. The group was founded by a group of women who came together to hang out and support each other. Growing up many of the women felt that they really hadn’t been able to connect with other women. The rides allow them the freedom to be whoever they are without anyone telling them no.

I am divided about this film. To be honest I am completely aware that I am the wrong audience for this film. I am most decidedly not a young woman of color but I sense that if I were I would be thrilled that the film reflected a life where anything was possible and where one could hopefully find the strength to overcome the abuse and stigmas foisted upon them by society. If you are a young woman like the ones who are members of the group this film is an absolute must see.

On the other hand I don’t think the film completely works past a certain point. Yes the film explains who the Psychos are, why they were founded, the lives of the women before and after, but after a while the film kind of sputters. There is a sameness to some of it. While we do get to see the women and the changes the group brings in them and their world, I’m not sure it’s enough to sustain the films 75 minute run time. This would be an excellent 60 Minutes piece.

Forgive me I feel bad not liking the film more. I feel like not liking the film will be taken to mean I don’t like the group- which isn’t the case. Its more I think what these women are doing is really cool, I just wish that they had someone who could have put the film together so that it revealed their greatness to the whole world and not to a select audience.
Posted by Steve Kopian at June 09, 2016