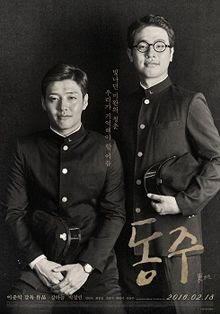 Portrait of poet Dong-ju who grew up under the Japanese occupation  of Korea. Forced to speak only Japanese he wrote is work in Korean and worked on Korean independence- something that would land him in a Japanese prison.

A starkly beautiful film, DONG-JU is a film that not only tells the story of Dong-ju and his his cousin but also highlights the terrible things the Japanese did while they controlled Korea. The razor sharp black and white photography helps to put us into this other time and place.

The trouble is that this is very much another time and place. Watching the film without knowing the full history of the "colonial period" where Japanese lorded over Korea kept me distanced. I could follow what was happening but at the same time I was very aware that there was backstory that I wasn't aware of. All through the film there was a sense that I should know more about the history, and more problematically about the the man at the center of the film. Yes I know he is the best known of Korea's poets but what are the myths about the man that make him so compelling? As told here he is a guy who wrote some killer poetry.

This isn't to say that DONG-JU is a bad film, it's not. It is a quite good film, at least for those who know something of the subject. Without having some connection to the material going in I'm not sure how moved anyone is going to be coming out. I know that the pre- end credits crawl with additional details of Dong-ju's life and a post film trip to Wikipedia filled in details that either I missed or weren't translated in the film.

I like the film, but to be completely honest I can't really say what I think about the film until I first read more on Dong-ju, and life for Korean's under the Japanese and then try the film again.

For tickets and more information go here.
Posted by Steve Kopian at June 26, 2016