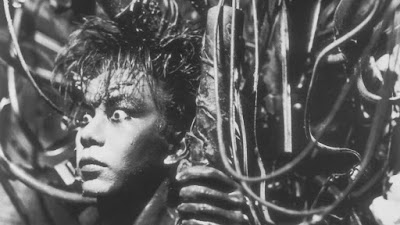 Tetsuo The Iron man has two sequels, thousands of imitators and it influenced thousands more either directly or indirectly. This low budget film shook up the film world and changed everything that followed it. Its visual style, lack of crystal clear narrative and dialog created a visceral punch that’s still being felt today.

The plot has man becoming a machine, either in reality or in his head. What’s real and what isn’t clear.

I’m not sure what to say about the film. I was going to talk about the cyber punk style the film was part of. but then I realized any of the films that I wanted to talk about like Death Powder or 964 Pinocchio followed this. Tetsuo really is the starting point of a film movement.  Its style was then taken up by a number of radical young filmmakers who saw the film as a way of mainlining feeling into the audience

If you’ve never seen the film you should. It’s a must see not only because the film changed everything that followed, but because it’s a good film. A black and white nightmare of body horror, the film pushes the David Cronenberg idea of a body in revolt to delirious heights. It’s a film that jumps on your buttons over and over again until they stick in place. It’s a film you walk out of exhausted and exhilarated. It’s truly one of the crown jewels of cinema because it’s a film that only could exist as cinema.

What bothers me is that director Shinya Tsukamoto is known for Tetsuo and not for all of the films that followed. A killer director his films like Snake of June, Nightmare Detective, Tokyo Fist, Gemini, Bullet Ballet and the crushing remake of Fire on The Plains he has pushed cinematic story telling in interesting ways. More amazingly none of his films, other than the sequels look like any other. Tsukamoto cleans the slate with each film and we are better for it.

Tetsuo is a must see. If you never seen it then you must try to get to Lincoln Center to see it when it screens Saturday. If you’ve seen it but only on TV then you also must see it at NYAFF because seeing this on the big screen is a mind blowing experience and is nothing like seeing it TV,