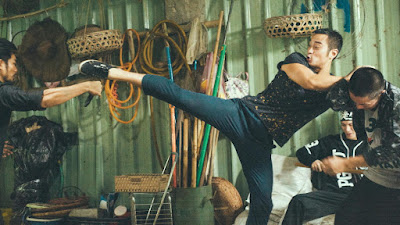 Dark comedy/drama has a hitman looking to try and unlock the reason that he is suddenly being haunted by the ghosts of the people he's killed. Using a medium his boss recommends our hero begins a quest to find out why he the ghosts are hanging around him. Its a quest that causes him all sorts of trouble,

Genre busting film is very hard to classify except as something that will absolutely thrill anyone who wants to see a great film especially one that doesn't stick to genres. Seriously this film jumps from crime drama to comedy, to supernatural tale, to romance to pretty much every thing you can think of except science fiction and musical.

A mind bending , heartbreaking, very funny film THE LAUNDRYMAN is just a shot of pure cinematic magic. This is one of those films that feel like a full ten course meal. Its a film that keeps rolling out the twists as it goes becoming even more satisfying as it goes along. Its one of those films that when it ends you want to get up and go home because you've not only been entertained but emotionally moved as well.

This film is playing early on Saturday at NYAFF and I'm curious how it's going to affect the films that follow it since the next two films are nothing like this.

A must see when it screens Saturday at Lincoln Center

For tickets and more information go here.
Posted by Steve Kopian at June 22, 2016