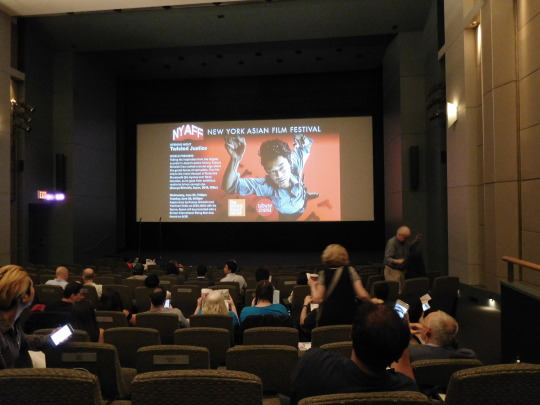 It was good to be back at the Walter Reade for NYAFF 2016. Walking in I saw Earl who I high fived. I haven't seen Earl in ages and it as good to see him lurking about. I then began the slow round of talking to everyone I haven't seen since last year...

Walking into the theater I got as far as the lovely Lee and the conversations began about being home, the selections this year and how everyone was falling into their usual seats. We were talking for so long that when Alec showed up I still hadn't found our seats. We then found them on the opposite side of the auditorium than usual and was questioned by other regulars of the festival about not being in our usual places.

The lights went down and Rufus introduced Sam who welcomed everyone and then brought the Subway Cinema crew on stage. He then brought out director Kazuya Shiraishi and producer Yoshinori Chiba of TWISTED JUSTICE who joked about the film and its place as the opener.

We were then reminded that there would be a Q&A following the film and a party after that. I bolted after the film because I had mistimed trains  and if I didn't leave when I did it was going to be a long stay in Penn Station waiting to get home.

It was for the most part really nice to be back in the trenches once more.

For those playing the home game I do not have a scheduled screening until Monday- however reviews of everything will be posting through the weekend.
---
As for tonight's movie

I had read a couple of positive reviews of TWISTED JUSTICE and I was told by someone else who had seen it that it was wild and crazy and good.

The only thing I can think of is that the film plays better on TV than on a big movie screen because what I saw tonight was a mess.

Actually what it is is a film that doesn't know what it wants to be or be about. It thrashes about for two and a quarter hours not being about anyone or anything. The pieces kind of work but not together.

The film is the true story of a cop, here called Yoichi Morohoshi, who joined the police force because his judo skills would win the police the national championship, He was grossly unqualified and he knew it but he joined anyway. Starting as an inexperienced nerd he struggles and blind lucks his way to success in a system that rewards success via quotas. The more arrests you make, drugs you find and guns you seize the farther you go.  Morohoshi is very good at scamming the system and over time climbs into bed with the yakuza and other unsavory people. It all goes on like a weird illustration of Murphy's Law and the adage of people rising to their own level of incompetence. It eventually all collapses, leaving a trail of dead bodies across the front lawn of justice.

Nominally a comedy, the film, especially in the second half shifts tone into dark realism at random moments. People are beaten up, strung out and break apart. The shifts tone do not work in the least, largely because even the tone of the humorous parts don't really have a consistent tone. Shifting from low key situational humor to just silliness it's all over the place.

Everything is cartoony until its not. Morohoshi comes off as a clown more than anything. Actually the film doesn't have many details as things just happen and side characters just appear to say jab an ear with an ice pick.
A large problem is that the film really doesn't have any real characters.  Are these people buffoons or real cops? I have no sense of anyone existing beyond the scene they are in.

I won't even talk about the women in the film who are either love struck does or power hungry whores. That's probably giving them too much characterization since the women are basically sex toys for Morohoshi. All we seem him do is bump uglies with them.  They are so marginalized that the two women blur together after awhile. Then Morohoshi rapes one because she ends up strung out on the speed he is selling before dumping her in prison to get clean. Thoughtful guy, not. While the rape is bad enough because of its ugliness, it's made worse because its out of place for Morohoshi. Its bad enough that it had several people around me wincing- especially because she seems to like it because he's finally paying attention to her.

The rape illustrates a key problem with the Morohoshi, and that we really don't know who he is. The normally sweet guy suddenly turns extremely violent for no reason (perhaps to show how far he's fallen). It probably shouldn't surprise me since he is normal person at some points and goofy in most others.

The plot of the film covers roughly 30 years of time. It begins in 1975 when Morohoshi joins the force and then just ping pongs through time to the next promotion. It would be okay but there is nothing special or unique the time jumps, its just more of the same as they try to buy guns to make it look like they are doing their job. The repetition could have been cut down and the film stream lined and tightened. Frankly other than a hair change there is nothing to distinguish most of the time periods apart.

As the film races to it's conclusion several WTF moments pop up when the strung out Morohoshi is sent to the boonies because his plan to buy guns has blown up big time, and because he's become a drug addict. Suddenly the character has gone gray and is wearing straggly facial hair...both of which comes and goes randomly. He is on and off physically broken for no reason. And coming and going randomly is Morohoshi's madness which has him filling in a report ala Jack Torrences' novel in THE SHINING and babbling oddly. Who is this guy and what is he doing in this film?

What pisses me off most about the film is that I almost gave the film a pass, I almost let the film go with a positive review despite all my issues because there is this scene towards the end where Morohoshi is in prison and talking to his attorney and he explains his character and why he did what he did. Its as glorious a sequence and piece of acting as you'll see all year- its an Oscar worthy performance. The trouble is that it comes in in the final moments to kick us on the ass and act as smoke and mirrors move. Yes that's who he is and what the film is, but GOD DAMN IT THE FILM DIDN'T EARN IT.  Its a grand "ah ha" moment that doesn't belong here- its pat on the ass as it sends us into the streets and complete bullshit as a result.  As I said its a brilliant sequence- but its from another infinitely better film we should have seen instead.

In fairness I do have to say I did like pieces of it- but as a whole, as I told a friend who missed the film, I could have had a more productive evening staying home and trying to knit a pizza, while I still would have been frustrated with the end result I would have at least become proficient in knitting.

I really don't think much of the film, I was going to write a brief three or four lines because this was part of the Opening Night report, but got carried away.  On the other hand people like Joe Bendel liked the film so the choice whether to see the film Tuesday when it screens again is up to you.