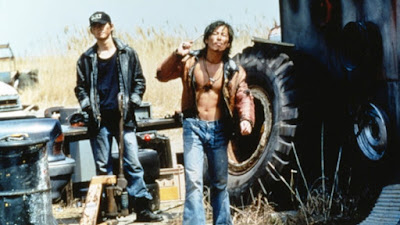 What follows is my IMDB review for SWALLOWTAIL BUTTERFLY slightly tweaked. I've seen the film several times since I wrote the piece and I've seen HANA AND ALICE completely as well.

SWALLOWTAIL is a film that produced arguments, many verbal some almost physical because several people I knew thought the film was the second coming of (insert great work of cinema here). It was a film that broke the rules, rattled their cages and made them fall in love with cinema again. I thought it was over long, rambling and nothing special.  I can only imagine what would have happened if the film had appeared in a world like the one today, instead of one without Twitter Facebook and other social media nightmares. I'd probably have ended up in a ditch somewhere.(though that actually almost happened but that's another story for another time)

I've seen SWALLOWTAIL four maybe five times over the two decades and I'm still not loving it. I considered rewatching it again for this years NYAFF, but there are 51 films that I haven't seen and the thought of trying one I keep trying to like when it's over two and a half hours isn't something I need to do. Perhaps maybe down the road I'll try it again.

For now here are my thoughts from IMDB

Love it or loath it tale of a young girl in Yentown who's mother dies and she is taken in by a collection of oddball characters.

Polyglot film is a mix of languages and styles with a drive to be about something. It didn't work for me and after about a quarter of its two and a half hour running time I had to give up, not because it was bad, rather because it just wasn't working for me. Its too hip and happening. Usually I like Shunji Iwai, the directors work. His Arita in Jam Films is wonderful, and Hana and Alice is very nice. I wish I could tell you more about the film but its one of those films that just didn't seem ever to come together...

That said worth a look since some people I've read love the film.

For tickets and more information go here.
Posted by Steve Kopian at June 21, 2016