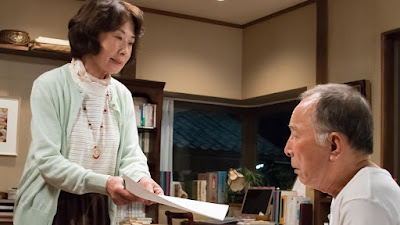 In the middle of golfing and drinking his way through retirement Shuzo is shocked to his core when his long suffering wife hands him divorce papers in answer to the question of "What would you like for your birthday?"This shocks everyone in the family out of their complacency and well...

Absolutely charming small scale gem. is a real delight. A gentle domestic comedy hits all the right notes and creates smiles if not laughs from start to finish. Its  a film that takes the family comedy that's been worked over the last hundred or so years and takes the best parts to form a winner of a film.

This is one of the real surprises of this years New York Asian Film Festival. Here is a film that I expected very little from that absolutely charmed the pants off me. This is an early pick for what may turn out to be one the to or three films that ends up being talked about all through the festival- you know the sort of thing that becomes some sort of secret club for those who were there and lucky enough to actually have seen the film.

For tickets and more information go here.
Posted by Steve Kopian at June 24, 2016