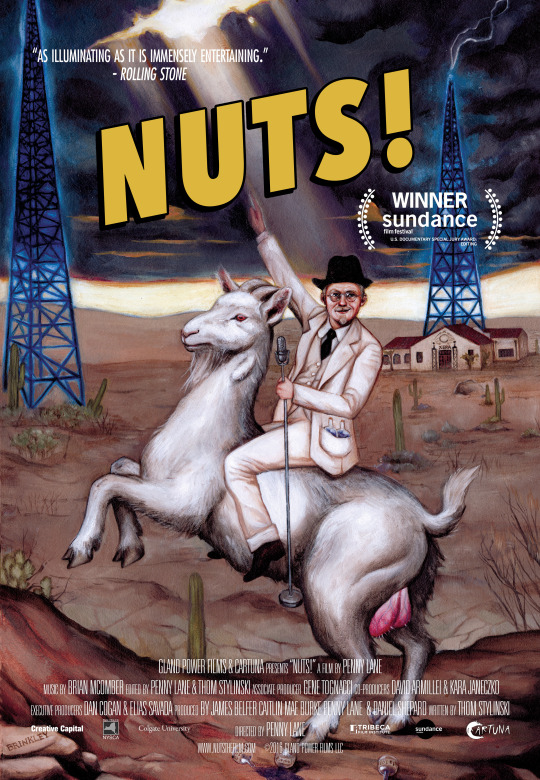 Penny Lane's NUTS is the story of Dr J.R. Brinkley who used goat testicles to cure impotence in the early 20th century. Brinkley was so successful that the town in Kansas he lived in prospered as did his wealth. He was a pioneer of radio and helped the popularity of country music to spread across America. Of course Brinkley's success made him a target...or so the story goes.

A mix of animated sequences, talking heads, photos and narration NUTS is a film that is very deliberately told. Its a film that sets up it's central character and then knocks him over as his grand tales are found to be less than truthful. Its a film that sucks you in and takes you along- and then turns on you.

For me the film is an amusing trifle of a film. It is most certainly entertaining but I'm kind of at a loss to see in it the film that has won several awards.  I'm also trying to find the reason that several friends have insisted that I really must see the film because I was going to love it. (Sorry I like the film, and not much more than that)

For me the problem is entirely the presentation, it simply didn't work. I didn't like the animation style, the intentionally flat recreations nor the feeling that this would have been a great 20 minute film. I'm sorry this film just rambles on toward a conclusion we can pretty much guess is coming- Brinkley was a charlatan.

Mostly though, I really dislike the tone of the film which never fully sold me about Brinkley's success. There is something in the awkward animation and flat toned narration that lets us know that a flip is coming somewhere down the road.

After I watched NUTS to the end I went and found a piece by Lane where she talks about what the film is really about, namely that its not that the people around Brinkley were gullible but how we all are. Lane said she wanted to make a film that makes us rethink how we see the world. She wants to seduce us so that we are aware that we are being seduced. The trouble for me was she never really seduced me. For me it was kind of like watching an okay storyteller tell you a tale with a sting in the tail. You're amused by the tale but you know things will flip eventually and when they do you're really not all that surprised because there was something about how the story was being told that clued you in that the teller was looking ahead to something and not being here in the minute.

Watching the film I couldn't help but think of Orson Welles brilliant F IS FOR FAKE which so masterfully seduces you with the story of the first hour that you lose yourself and are fooled by the end despite being told that it was coming. Lane never fully seduced me. She never had me accepting things as she said they were because the tone was much too knowing and up to something.

To be honest I'm probably nitpicking something the vast majority of you will never feel. I'm guessing that most of you will go along and then giggle when the truth is revealed,

I wanted so much more than just like this film.

NUTS! begins it theatrical run at the Film Forum Wednesday.

Addendum; doing some post film/post review reading on Brinkley and his crazy life I have come to feel that I really wish that someone would turn his life into a miniseries. Good god its a wild life, more so than this film even touched on.
Posted by Steve Kopian at June 19, 2016