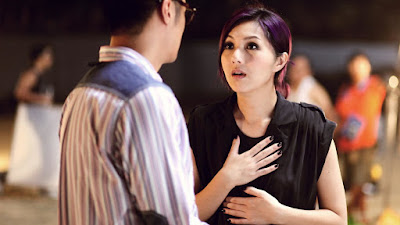 This is the review I wrote for LOVE IN THE BUFF back in 2012 when the film played NYAFF. It was part of a long introductory piece on that year's festival and it was inserted in as backhanded review of sorts.

It is not my best review, then again it was written to be part of something else. I probably should have rewatched the film and rereviewed it but with 51 other films to I had to trim something somewhere.

... I have taken in Love in the Buff. This is the sequel to Love in a Puff which had two people meeting and falling in love, only to find they make each other crazy despite being mad about each other. Or so I’m told. I never saw Love in a Puff so I have no idea what went before…

…a fact that kind of worked against my completely enjoying Love in the Buff. Yes, everything about this film, which follows the pair as they spend time away from each other, while finding they have to be connected, is top notch. Its funny, charming, moving and it has a first rate cast you connect to. The trouble is I felt like I was missing all the back story.

Definitely worth seeing if you’ve seen the first film. If you haven't its still worth a shot.
Posted by Steve Kopian at June 27, 2016