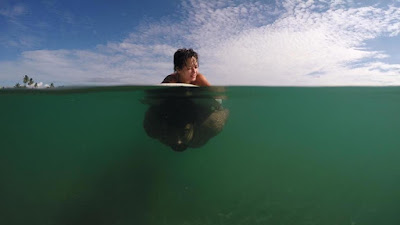 Love and surfing on the Philippines beach of Baler as a surfer named Ford (who may or may not be the son of Francis Ford Coppola) drifts through life with his girlfriend.

Small inde gem channels the best of the American inde film movement and transfers it  half a world away. This is a great looking film that hits all the right notes. The cast is great, and frankly better than the ones in many similar American films. Everyone here seems to be inhabiting their roles rather then acting. The locations are lovely and the music is awesome (anyone know if there is an album out?)

This is the second film screening at this years NYAFF and its going to confuse the hell out of some of the audience who are expecting the typical genre fare (more so when you consider the film is being followed by a balls to the wall horror film). There isn't anything genre about this film unless you consider character driven films to a genre now.

I really like this film a great deal. Consider it the first real surprise of the festival and one of the front runners for one of the top films.

And please forgive the lack of detail and discussion but this is one of those films where it's best if you go in blind and just let it hit you. Knowing the film is good and worth your attention is all you need to know

For tickets and more information go here.
Posted by Steve Kopian at June 20, 2016