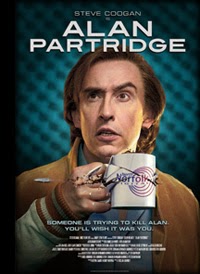 Here at the New York Film Festival it's a day for hostage-taking films: from the sublime (Captain Phillips) to this afternoon's ridiculous: Steve Coogan's Alan Partridge, based on Coogan's long-running radio and television character as a long-running radio and television...er, character. Taking a situation comedy based around a specific character and turning it into a motion picture is always a gamble — see, for instance, Mr. Bean, Borat, or the wide range from hilarious to horrible in the various Saturday Night Live movies. Generally requiring significant world-building behind the character and fleshing out his relationships can be a gamble. Coogan's done much of the heavy lifting, though. The wide variety and range of Alan Partridge's appearances in UK comedy have rounded out what would be a fairly one-note comedy character and for fans of Coogan, much of the back-matter on Partridge's personality and quirks is already well colored in. I'm one of those fans. For a newcomer to Partridge's world, however — which will include most of the United States — he's got some uphill work to entertain and amuse with this very British comedy. Luckily the situations and supporting characters are so well-drawn they create a hilarious world regardless of previous familiarity. 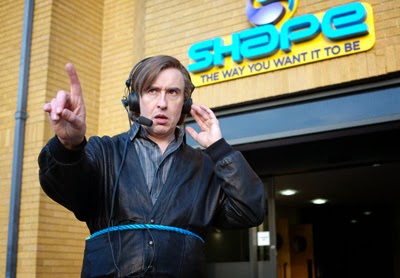 When local radio DJ Partridge's hilariously cowardly contract negotiations go awry, he causes (not inadvertently) the firing of colleague Pat Farrell (the brilliantly cast Colm Meaney, who doesn't get enough film work as far as I'm concerned). Postal Pat (with no black-and-white cat in sight) takes the station and its employees hostage with an ineptly handled shotgun, and he trusts only his mate Alan to handle the negotiations between his demands and the police, unsuspecting Alan's the one who got him into this mess in the first place. Coogan, Meaney, and Tim Key (as a blissfully eager presenter) seize control of the airwaves, airing a bizarre radio show to take their demands to the people.

Alan Partridge's laughs come from a decently balanced blend of wordplay, well-drawn characters, and pratfalls; the extended sequence of Partridge crawling out of a window and losing his pants a worthy successor to the slapstick stunts of Peter Sellers as Inspector Clouseau. A lot of the humor consists of Alan Partridge saying something cluelessly outrageous and other characters staring at him in disbelief, but most of the others are even more clueless than he — that bizarre supporting cast of characters from a world straight out of UK sitcoms or Simon Pegg films. 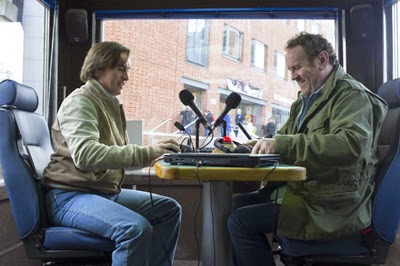 It's perhaps hyperbole after 25 years of his performances to admit that Coogan nails the character perfectly, but he acquits himself well on the big screen in a much longer story. He's quick with a glib quote and a wink, and the fast-paced dialogue ensures that if a joke falls flat, there'll be another one in a few seconds. It's all extremely British. But Coogan's not afraid to sprinkle a small handful of quiet, sad, serious moments and then punctuate them with black comedy. "I brought Molly here, to scatter her ashes. Buried at sea," Pat says. Alan adds: "Like bin Laden." It's a handful of silly, irreverent fun and it will likely make a bajillion dollars in the UK. Here in the United States is another matter. If I had my way this would be on every American critic's "Favorite Cult Film" list for the year.

Alan Partridge premieres at the New York Film Festival 2013, and opens nationally in the US early next year.
Posted by John DiBello at September 29, 2013