Secret of the Magic Gourd 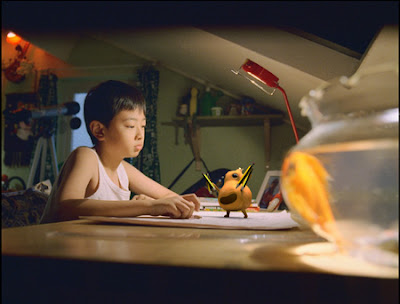 (This review is based upon seeing the film in Chinese without benefit of English subtitles when it first was released in Asia as a DVD.)

A young boy who dreams too much is often the laughing stock of his class. One day while fishing he reels in a magic gourd that talks and is granted what ever he wants.

A good Disney film from China, that once I would have bet would never have been seen in the US but is now out on Disney DVD. Though the story is aimed for young kids, the film still scores high points because the acting of the kid and the character animation of the gourd and the frog are excellent. The animated characters are real characters and I for one completely bought that gourd was wandering around. It helps that the actor doing the voice seems to be playing it straight, which is great.

To be honest the animation here is some of the best character animation that Disney has released. I'd love to see this in English since I think this could really work for English speaking audiences. I saw this in Chinese sans English subtitles and it worked for me.

There is a genuine sense of wonder and magic in many sequences in ways that Disney US hasn't managed to manufacture in quite sometime. Sue me I loved the room full of toys, the gourd on a bird, and the out takes. To be certain the film is a bit too innocent for some audiences, and the denouncement could be seen at the start, but if you take this film for what it is I think you'll have a good time. I really liked this a great deal.
Posted by Steve Kopian at September 13, 2013