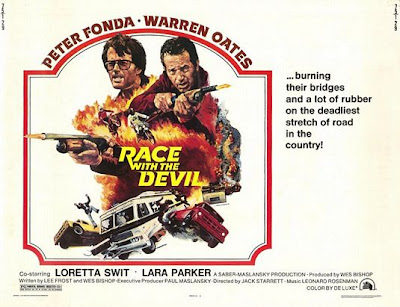 Race with the Devil will really disturb me if I see it at the wrong time. If I see this too late at night the horror film will just sit with me all night and invade my dreams.

The plot of the film has Peter Fonda, Warren Oates Loretta Swit and Lara Parker taking their camper out on vacation. They pick the wrong location and catch a satanic cult making a sacrifice and are discovered. What then transpires is a movie long chase to get away.

That’s it, that’s all there is just bad guys chase the good guys until time runs out.

Nothing in the film makes logical sense, I mean it would require a vast satanic network of people ready to appear at a moment’s notice , and so much destruction is caused and no one notices, but at the same time if you just give yourself over to it it’s a scary film, all the more so when you consider that the majority of the people chasing our heroes are nameless and faceless entities. In its way it’s the ultimate us versus them story.

Of course you can’t think about it because if you do the whole thing will fall apart. I try not to.

A minor gem of 1970’s horror (hey say what you will the film is still on the radar when so many others have disappeared)
Posted by Steve Kopian at September 04, 2013