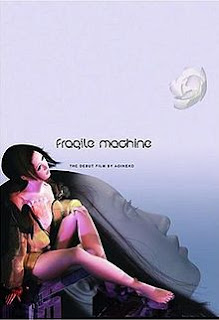 Leda Nea agrees to undergo an experiment concerning machine and human interfacing. The experiment doesn't go as planned and Nea is trapped in a machine shell trying to come to terms with her old live and new.

Or something like that, I'm not sure it was lots of mostly pretty pictures with a New Age jazz score behind them. Its more dream like than lucid, following its own set of rules and reality. Its nice but never really seems to amount to very much. It does struggle to be meaningful, but I don't think it really succeeds. I think it thinks its meaningful, which isn't the same thing.

The film, while often breathtaking, often reminds me of the Mind's Eye video tapes from 10 or 15 years ago which collected what was then cutting edge animation and put it to a similar type of score. I make the comparison because not only do both have a similar feel, they also often use a similar style of animation, which 15 years ago was cutting edge, but here seems more than a bit out of date. The "old school" animation isn't bad its just that compared to some of the other hyper real imagery it seems very much out of place.

This is a renter at best.
Posted by Steve Kopian at September 18, 2013