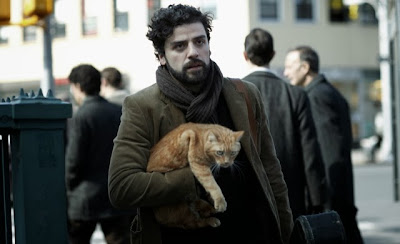 My question is if the Coen’s wanted to make a music album with T Bone Burnett they should have just made a CD and not wasted the time making a rambling movie like Inside Llewyn Davis.

The film is the story of Llewyn Davis a folk singer adrift in life. As the film begins he’s finishing up his set. This leads into getting beaten up for heckling a performer the night before. It’s a pattern that will repeat itself over the next week. As Davis wanders through his life we watch as he tries to get money from his record label, tries to find a gig, scams a place to sleep, deals with married friend he may have knocked up, and take a trip to Chicago. There is also a running gag about Lllewyn and a cat that escapes from the first apartment that we see him crash in. During the course of Davis’s week we watch as he ponders his life and ends up exactly where he began.

Now I’m going to talk about the film as if I just walked in off the street and saw the film and not without any reference to what is contained in any material in the press notes. I mention this because this is one of those times where the press notes (which run about 50 pages and read like a novel) fill in a great deal of stuff not on the screen. Just seeing the film we do not get the insight into Greenwich Village in the early 1960’s, not do we get an explanation of where the Cohen’s were pulling from- the film has it’s basis in some true stories. Looking at the notes on the train home I had several Ah ha moments where I understood things more---and realized that the film as a film plays very differently than if it’s something that has been explained to you. Since odds are you won’t have the luxury of reading the notes I’m reviewing it just as a film.

As a film, this is pointless exercise. This is a series of encounters Davis has with various people who are largely pissed off at him, or are somehow abused by him. Davis travels all over to New York, to Chicago, almost to Akron and ends up literally where he begins, getting beaten up by someone (the same person as at the start) who didn’t like his smart mouth. Nothing much changes except that Davis becomes less happy with the trouble he’s created. There is no drama, just Davis behaving and reacting badly to the things that happen around him. It’s a road trip to disillusionment for a jerk. It left me going AND…? Why are you showing me this? And it's not so much that I don't know why we are seeing this, but why should be care on a guy who is, out side of his ability to sing, a jerk.

I suspect that on some level that this is the Coens’s attempt at riffing on Waiting for Godot with the film ending where it’s beginning and John Goodman’s jazz man being some weird form of Pozo (a role Goodman played on Broadway). But where Beckett’s play works because it’s set somewhere else, Here the absurdity just seems affected and contrived. (It’s a cousin to the elliptical beginning and ending of After Hours)

As if the And…? ending wasn’t bad enough, the problem for me is that the film drifts in and out of cliché at several points in the film, most egregiously at the end of the film when Bob Dylan makes an appearance. Why must almost every dramatic film that touches on the folk scene in Greenwich Village always play the Dylan card? Even the documentaries on the subject don't use him as a punchline   I would have been fine had it happened earlier in the film, but he’s trotted out at the end as some form of punctuation

I should say that I don’t hate the film, hell the cast and everything else about the film is first rate, the trouble is that I don’t know what the point of it all is.

Actually I suspect that the film exists to give the directors a reason to make music with T Bone Burnett. When a movie like this results in such good music I can pretty much forgive it anything.

Truthfully it’s a good film, but I really feel bad for anyone paying the big bucks to see this over the weekend at the New York Film Festival. Its worth seeing but I’d wait for December when you can scoot into a theater for a bargain price. 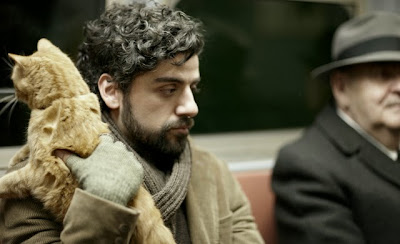