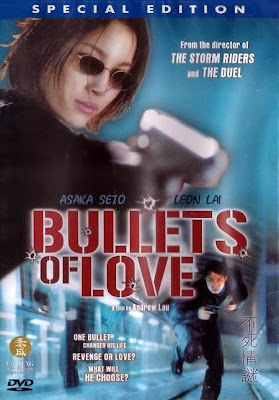 Hong Kong action film about a cop, Sam, who arrests a powerful crime lord and what happens in the wake of that event. Following the arrest Sam's girl friend prosecutes him but only gets a partial conviction. With the villain sent away for a short time, and vowing revenge, the couple heads off to Paris where an assassin awaits. The girlfriend is killed and the Sam retreats into the country where he helps to run his uncles bar. Into Sam's life comes another young woman who is the exact image of his lost love. Sam doesn't know what to do, but he finds he's attracted to her. Things become complicated when he finds she has pictures of him and his girlfriend in Paris taken before the hit…

Good film gets a bit "odd" in the final third as what exactly is going on is revealed and things take the a couple of turns that were not really expected. Formulaic its not. Its films like this that keep me coming back to films from Asia since they rarely do what I think they are going to do.

Definitely worth a look, especially if you want to see something that is not your typical run of the mill story.
Posted by Steve Kopian at September 07, 2013