This is the TV version of the long running hit West End and Broadway smash Beyond the Fringe. It is a show that started as review for the Fringe in Scotland and then carried over to long theatrical runs across the globe. It also changed popular culture as we know it, not to mention comedy and pretty much human existence. 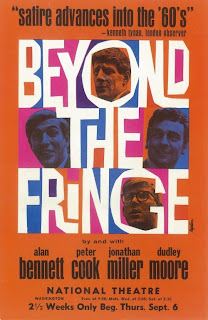 If you want to laugh then see this show. This is sketch comedy at its finest, as Jonathan Miller, Alan Bennett, Dudley Moore and Peter Cook riff on pretty much everything under the sun from religion, philosophy, music, the end of the world and being a miner. Its a wild mix of nothing is sacred humor with a very clever edge.

If you want to trace the history of British comedy one would start with the music halls move on to the Goons stopping at this show before moving on to people like the Goodies, Monty Python and Eddie Izzard. These are the guys and this is the show that began, in part the draining of the colleges and setting them to work for places like the BBC. Python took the anarchic sketch comedy found here and welded the insanity of Spike Milligan and the Goons. If you need more proof consider that a good number of bits from this show ended up in the Secret Policemen's Balls that were staged by the members of Python for Amnesty International. They used the material because its funny.

While you no doubt know the later work of Dudley Moore and Peter Cook you have to realize that the other two mad man also went on to culture changing jobs. Alan Bennett's writing in and out of the theater (History Boys among other plays) has changed the face of the West End and Broadway,television and  memoir. Meanwhile Jonathan Miller went on to record every Shakespeare play for the BBC and write, direct and produce god knows how many plays and TV shows of such high quality you'd never suspect where he started.

Historical importance aside this is a very funny show. Certainly there are bits that have dated since it was first performed but on the whole the show remains relevant, and above all funny. If you like to laugh see this show.

You'll forgive me for not going deeper into more detail but you actually could write several volumes on the show and it's influence on everything that followed. For my money you'd best just see the show.
Posted by Steve Kopian at September 12, 2013