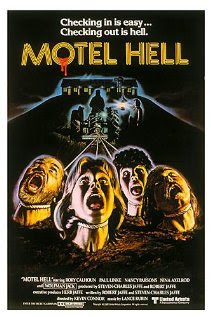 Come on you know the refrain: It takes all kinds of critters to make Farmer Vincent fritters.

Those critters include humans.

Classic 1980’s horror film has Rory Calhoun as farmer Vincent a well known local maker of meat products and the owner of the friendly Motel Hello. He quietly goes along with life with the aide of his sister. However when a young woman comes into their lives their carefully planned existence is thrown into a tizzy as Rory begins to think of becoming a married man. This doesn’t sit well with his sister and as the tension builds mistakes begin to be made and it becomes possible that someone might discover just what the secret ingredient is.

Wonderfully creepy and funny horror film has some now iconic images including the short of Calhoun holding a chainsaw while wearing a pigs head. This was the first time I ever saw a fight with chainsaws, which was something that had me and my dad talking about for days afterward.

I’m not sure how the film was received when it came out. I know I and the bunch of us that saw this on the opening night loved t. We got the horror and we got the humor, which is a send up of the Psycho inspired crazy runs a dead end hotel/motel genre. It’s a film that has stayed with us since we first saw it all those years ago.

Satire/send up aside, this is also just a damn fine gothic story of a family in turmoil. The whole idea of the upsetting everything unintentionally is wonderfully explored and for my money it doesn’t really take a a false step anywhere along the way.

One of the better horror films from the 80’s