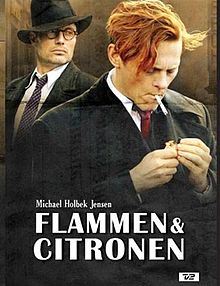 Mostly true (I've read there has been some changes) of two men known as Flame (because of his red hair or because he smokes constantly?) and Citronen (I'm guessing because of his car) who worked in the Resistance in Denmark during the Second World War. They developed a reputation for killing collaborators and spies. Their activities have placed them high on the Gestapo wanted list and yet the manage to breeze through to the point that they often celebrate their success in bars that the Nazi's hang out in. As 1944 goes on things begin to turn dark. Their friends are being caught and killed, and they are getting mixed signals from above. The British want them to continue the operation but the Danish government in exile wants them to stop because their activities are causing reprisals. More dangerously Flame has has become interested in a woman who he's been warned to stay away from.

Beautiful war film is at times haunting and heart breaking. It has sequences that turn your stomach at the prospect of being in a similar situation. It has the look and feel of an old style Hollywood film mixed with the brutality of todays films. The film reminded me of the look of Ang Lee's Lust Caution which had an unbeatable sense of place and time and style. Its also a little brother to Melville's heart rending masterpiece Army of Shadows. Wonderfully acted this is a film where you really like the characters and feel that even the small parts have a sense of weight.

As good as the film is, the film never quite achieves the greatness the film seems destined for in the early going. As much as I like the feel of the film, there are times when it seems a bit too Hollywood. The femme fatale story line is too cliché for a film that for the most part not cliché. There are also some odd moments that seems to speak more of being great on screen rather than true to the events as depicted in the film (in particular the end of two of the characters). The little bits don't destroy the film they just take what starts as a great film and make it something thats in the end very good.
Posted by Steve Kopian at September 17, 2013