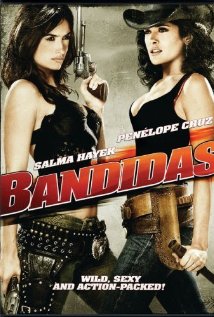 Caught this on one of the multitudinous HBO channels.

When a bad American played by Dwight Yokum forcibly takes control of various property in early 20th century Mexico for the building of a railway, Penelope Cruz and Selma Hayek band together and begin robbing banks to get the money to fight the bad guy. Its a bit more complicated than that but its enough to give you an idea as to what the premise is.

Its an amusing romp written in part by Luc Besson (which explains the smart ass tone) thats never too serious and never too far from some action sequence. I liked this movie a great deal since its perfectly mindless and the sort of thing you could wander in and out of and still be able to follow.

If there are any serious flaws its that more than once there seems to have been some scenes or some minor exposition.removed since more than once I had the feeling that I missed something as characters moved from place to place.

Wonderfully acted by the two leads,not to mention Yokum, Steve Zahn and a very funny Sam Sheppard (as a bank robber entrusted to train the pair of bandidas in his trade)

Far from the best movie ever made it is amusing, and perfect cable fare where all its flaws will be more easily forgiven. Worth a look for action fans and those who like light humorous movies.
Posted by Steve Kopian at September 14, 2013