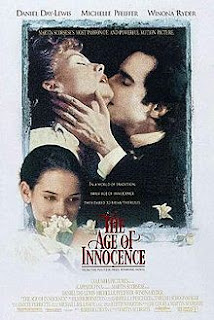 As part of this year’s New York Film Festival they are showing off a new restoration of Martin Scorsese’s film version of Edith Wharton’s The Age of Innocence. I’m kind of wondering at how run down the film could be since the film is only 20 years old.  I'm also a bit confused since I've never considered this one of Scorsese's better films on anything other than a technical level.

For me, a period drama of manners involving  is an interesting minor film in Scorsese’s body of work. For me the recreation of New York in the mid-19th century is much more interesting than the drama which kind of runs out of steam in the final third. I know the problem there is not Scorsese's, its the problem with the source novel, which kind of peters out as well.

The film follows Daniel Day Lewis's Newland Archer, a young attorney who marries Winona Ryder's May. However Newland becomes entranced with Michelle PFeiffer's Countess Ellen Olenska who is May's cousin and on the run from her abusive husband. Love blooms but the social rules seek to destroy the illicit couple.

The first time I saw the film was at a preview several weeks before the film was released. It was one of those screenings where you fill out the reaction cards. My memories of the screening have always been more vivid then those of the movie. I remember that the screening was packed. I remember that going in my friend Lou and I knew what we were seeing (the new Scorsese but nothing more) and had gotten there extra early only to find a huge line already formed. I don't think the majority of the people were expecting a period drama, rather I think they were expecting something a bit more violent. I didn't care.

What do I remember from that screening? I remember the film screened with an intermission for reasons I’m not quite clear on. I also remember Ryder’s performance getting roars of laughter each time she came on screen. I remember a sequence with a window late in the film getting so much laughter that all dialog was obliterated. I saw the film when it came out and they had altered her performance but Ryder still seemed wrong. I remember loving seeing the film on a big screen but not really caring much beyond the visuals.

I've never really warmed to the film any of the times I've seen it, which mostly was whenever I would stumble upon it on cable. When I do stop and watch it I'm trying to see if its better than what I saw at the preview but I never manage to find it so.

Its never been a film that searched out or felt the need to see. For me the plot is contrived and over done. Yes I know it's both a result of the society which spawned the novel and is depicted in it, but at the same time it has always struck me as more silly than gripping (And for the record I am not a fan of Wharton as a writer). I know it's cliche to say but in many ways I think the book is better.

Actually I think the problem with the film is much like what happened in post production. The film, one of the first to highly tout the use of computer generated imagery, was shot in large part on the North Shore of Long Island. There is one shot of Pfeiffer standing out on a pier looking off into the distance. In reading on the film I found out that the shot was done about two miles from my house- not that you'd know it since they removed much of background landscape, added a light house, some ships and then altered the direction of the lighting with the result that very little of it is real.

I'm at a loss  to explain the love some people feel for the film. I suppose its why some people love so many British dramas. I don't hate them, or this movie, I just don't understand the wonder people find in them.