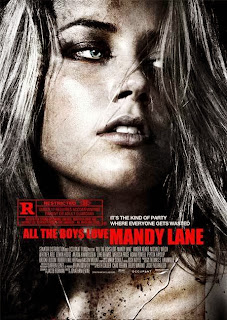 Stop me if you've heard this one before: a sunshine blonde and a plethora of dumb high school kids decide to have one final weekend blowout at some remote location. What getaway would be complete without insipid dialogue, people moving in slow-motion (like a commercial for the GAP), an indie rock/pop soundtrack, drug use, fornication, etc. No it's not a MTV produced film. It's the long delayed, mostly unseen, horror-thriller All the Boys Love Mandy Lane.

During the time this film has been in distribution purgatory, our star of the movie Mandy Lane, played by now known actress Amber Heard, has certainly gone on to bigger things. The same can be said about the director, Jonathan Levine, who had a surprise hit earlier this year with the zom-com Warm Bodies. Whenever you have a film like All the Boys Love Mandy Lane, which has been collecting dust for the past 6 yrs, it can be almost a blessing in disguise. It's built up such a cult following, something horror fans have been clamoring for, myself includes. Hell, it worked for other long awaited films such as Trick 'r Treat & Cabin in the Woods. Here's the thing, while those two actually lived up to their hype, All the Boys Love Mandy Lane feels as flat as a board. No wonder why it's been shelved for so long, it's just not good folks.

A bunch of horny teenagers take turns trying to get our main character alone, so they can sleep with her. Slowly they start getting picked off by a killer. Yep, that seems to be about it.  It's part slasher movie, part (insert random name of CW network show here), and 100% devoid of...well, everything. What else can I possible say, it's the perfect example of the back story being more compelling than what is on the actual screen. Oh but there is the big final twist at the end, which is just utter nonsense. Not that it had any chance of being some sort of saving grace.

Going back to my previous point, the best thing that has and ever will happen for All the Boys Love Mandy Lane is the fact that it was delayed. Had this been released back when it was originally intended, it would have been long forgotten by now. Something destined for the $5 bin at Walmart. So disappointing.

It's going to be hitting limited theatres in October, and it might garner some attention for fans of Heard, who may or may not be familiar with it's history. Either way, as bad as it may be, I'm just glad the wait is finally over.
Posted by Robert Grimes at September 22, 2013