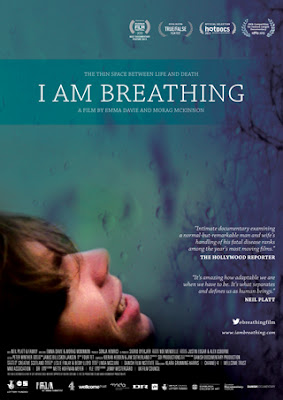 Billed as an uplifting look at a man dying of Amyotrophic Lateral Sclerosis (ALS)/Lou Gehrig's Disease I find that the film's definition of uplifting involves reducing it's audience to weepy messes.

These are the last days of Neil Platt a young man of of 34 who not long after becoming a father develops the disease that killed his father. Hoping to be able to put together something for his young son to remember him by he begins to record his life via film and a blog in the hope of giving his son something beyond photos and vague memories.

At times funny (the film opens with Neil trying to get out of a contract on the grounds he's dying and won't need the services) and at times (largely) very sad this film is a slice of end of life as we watch Neil prepare for the end of his life.The humor comes from Neil being Neil which is why the film is so sad, you don't want him to go.

For me the film is rather hard to review. How do you review a man's death? I could say This is an extremely well done film about what some of us may face one day. But that's not much of a critique. Actually the film is kind of critique proof for that reason- this is what happened to one man and his family- how do you discuss that? (Perhaps I could say that it's too focused on Neil and we only get to know everyone else by osmosis?)

While I have no real way to discuss the film, as I said how do you discuss one man's death, I do have a problem with the promotional material which promises an up lifting experience and reminds us what its like to be alive. I don't know if it reminds us so much as makes us glad that we aren't this poor guy. I was not uplifted, rather I was just saddened because of the loss.

Truthfully the film makes a wicked companion piece to TERRY PRACHETT CHOOSING TO DIE which I reviewed a couple of months ago about assisted suicide.

Is the film worth seeing and should you see it?

The film is most certainly worth seeing because it is a well done chronicle of one man's fight to the end. However there is no way I can say how you're going to react to the film beyond that since it goes to the end and because Neil seems like such a nice guy you may not want to meet him and suffer such a loss in 75 minutes.
Posted by Steve Kopian at September 05, 2013