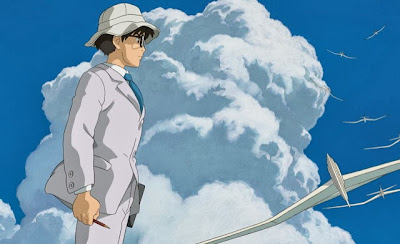 Said to be the final feature film from Hiyao Miyazaki  this is the story of Jiro Horikosh the designer of the Japanese Zero. It is a visual treat, that is over full of ideas and images but ultimately it's really two separate stories that probably should have been kept that way.

Beginning when Jiro was a boy the film traces his life from his first inclining about being a plane designer on through the end of the Second World War. The first half of the film focuses on Jiro growing up and his love of flight. The second is the romance as Jiro romances a young lady who he helped during the time of the 1925 earthquake that scared Japan both physically and psychically.

This is a visual treat. Mixing reality with fantasy (via dream sequences) this film indulges Miyazaki with a chance to animate planes, trains, boats and cars. There are so many contraptions in this film that there are times when the story seems to exist just so Miyazaki could animate say a ferry or a sailing ship. Having read interviews with Miyazaki I got the sense watching the film that he was smiling broadly was he prepared the various flying and sailing sequences.

While the film largely looks like a Ghibli film (the colors and the character design are all pure Ghibli- which as you know boys and girls means all the women look alike) there are times when the film doesn't, I'm not talking about the use of computer imagery, rather the use of what look like delicate drawings to show Tokyo in ruins or the train wreck or some of the wrecked planes. There is a fine artist at work with in several sequences and I wish that if the film is truly the last from the master animator that he had gone all out and done a whole film in that fine style.

What I love about the film is that it is much darker than almost any other Ghibli film with it's talk of war, scenes of war, death, and destruction. Sure there is fantasy but in no Miyazaki Ghibli film, except Princess Mononoke and the end of Howl's Moving Castle is there this much darkness. Even the romance has the spectre of death hanging over it. Its wonderful that Miyzaki finally moved toward more complex and dark subjects, but why the hell did he wait for the end of his career?

The film's almost devil may care first half gets grounded in the second as Jiro tries to make the great war plane, while falling in love with Noako Its a weird shift in the film that kind of unbalances the film. its not bad, its just so radically different from the first half to the point the momentum kind of stops because the film now has a central narrative thrust that pushes everything aside. Yea the dream sequences are still there- but at the same time they seem out of place with a realistic story. The shift in tone and the various plot threads made for a film that seems to be thematically a jumble despite trying desperately to be about something meaningful.

Also out of place are some weird side threads that go nowhere such as Jiro being hunted by the secret police. We can assume why, but its never spelled out and it ends up dropped almost as soon as it begins. Noako's illness takes some weird turns, especially in the final reel.

Watching the film I was at first confused by talk about how dark the film was, then as things went on I understood why people said it was. I also understood why the cultural references that are in the film- such as the earthquake and what it means to the country were keeping some studios from considering releasing it in the US. (Disney has it and frankly its going to be a hard sell- it ain't Totoro).

I like the film and to be honest I really would like to see it again. I'm also at a loss as to how people will react to the film since it's not typically Disney. I know the Miyazaki fans will love it unconditionally because he did it, but how this is going to play in Peoria where anything not Shrek or Ice Age is a tough sell is beyond me. A difficult challenging animated film that is not the light and airy romance of the images is going to confuse the hell out of most people. Better they are confused by films like this, but at the same time with Miyazaki stepping away will this be adult animations last gasp in the US?
Posted by Steve Kopian at September 27, 2013